Now with SP17 we have new functions in the direction of automated test runs.

And seconded – the test schedule and result check can be done in addition to the NWDS now also on a web UI.

The easiest way to create a new Run Configuration is by right mouse clicking on the test case itself. 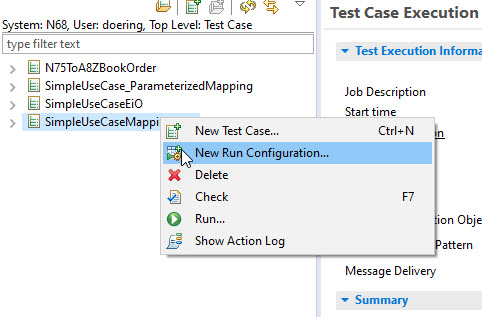 A new dialog opens where you can maintain a name, a description, assign a test case, a test data set, a target system and others. Once done, click on Finish. 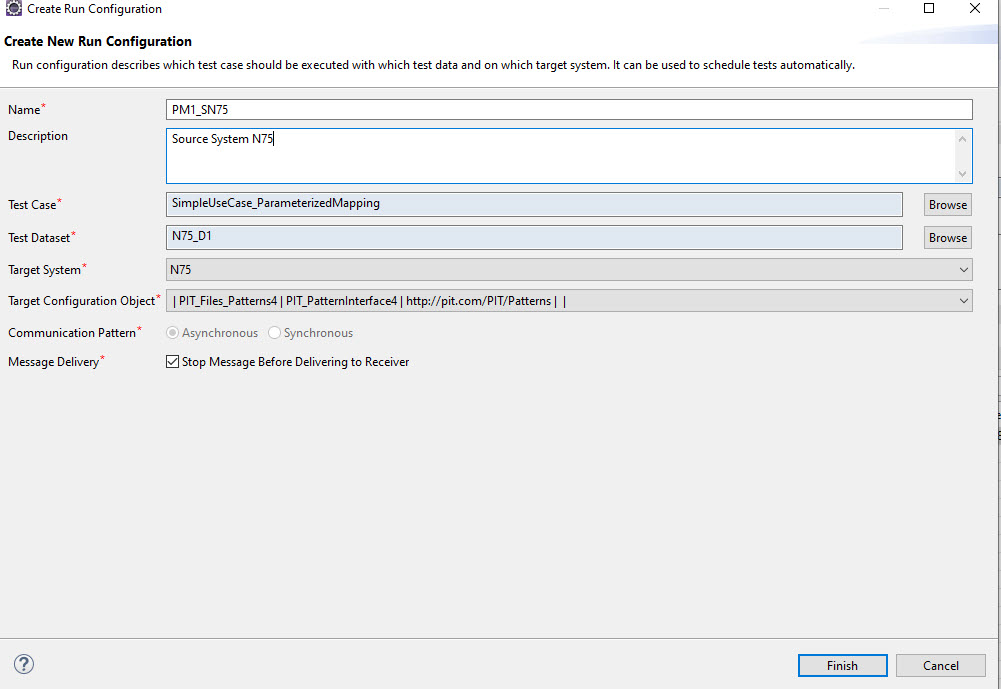 As soon as the Test Case Run Configuration is saved, you can schedule a task for it. 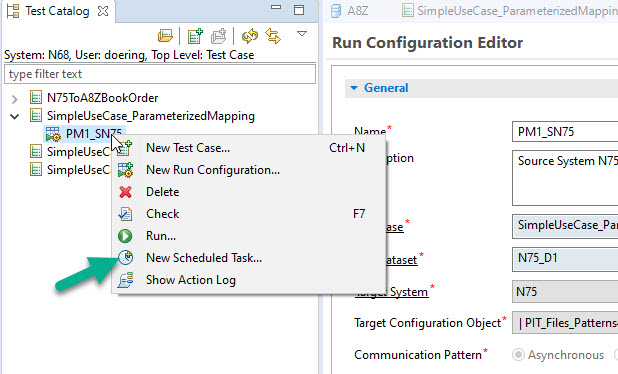 You have then the possibility to choose date and time and recurrence options. 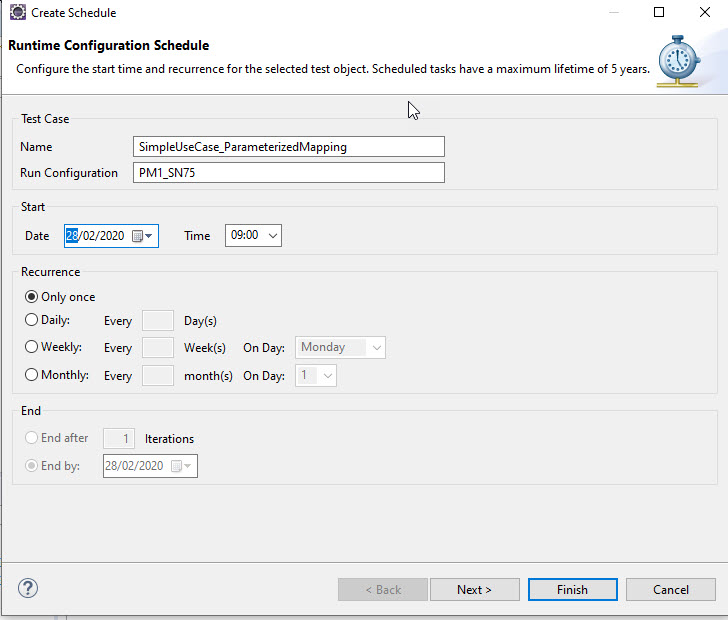 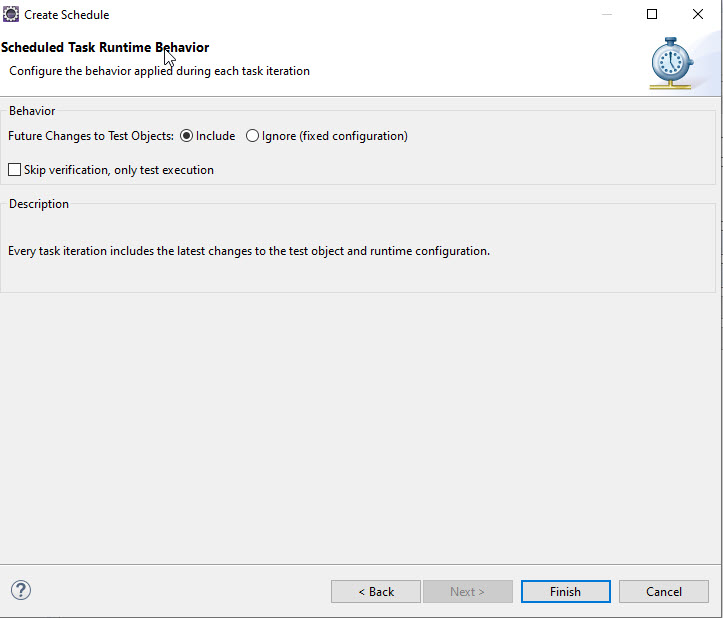 All scheduled tasks can be found in the Scheduled Tasks Overview

It is also possible to directly launch a run configuration. 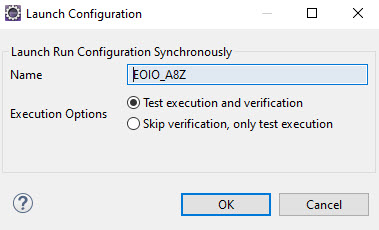 And of course, can we do this also for test suite run configurations from a existing test suite.

A new dialog comes up where you can maintain name and description. The test suite is preset. 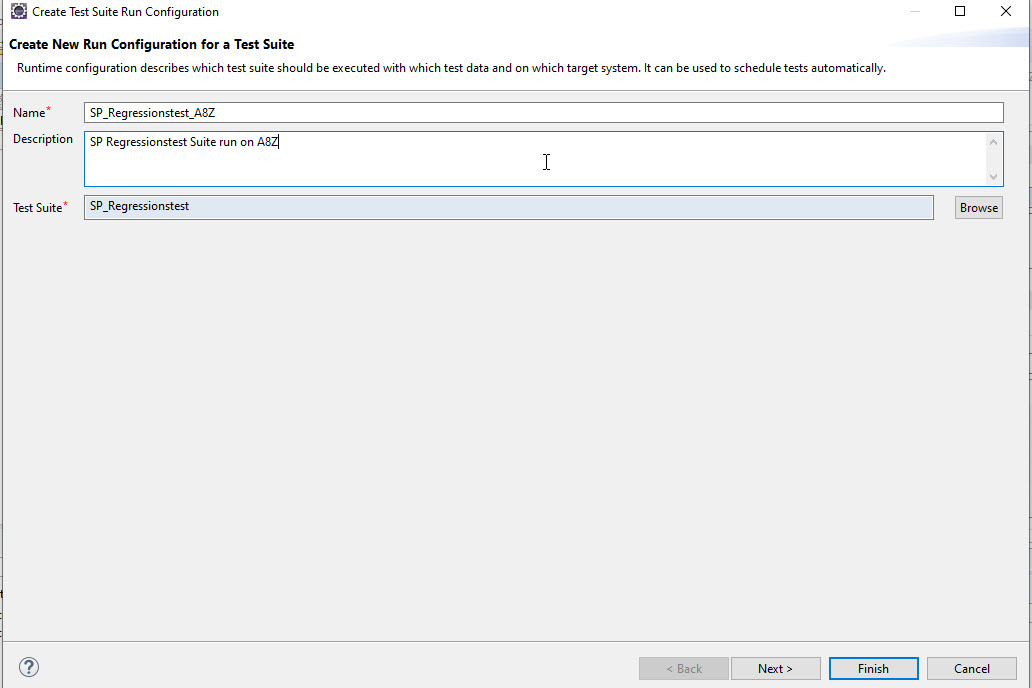 On the next screen, you can assign one or more test case run configurations from the test cases that are already part of the test suite. 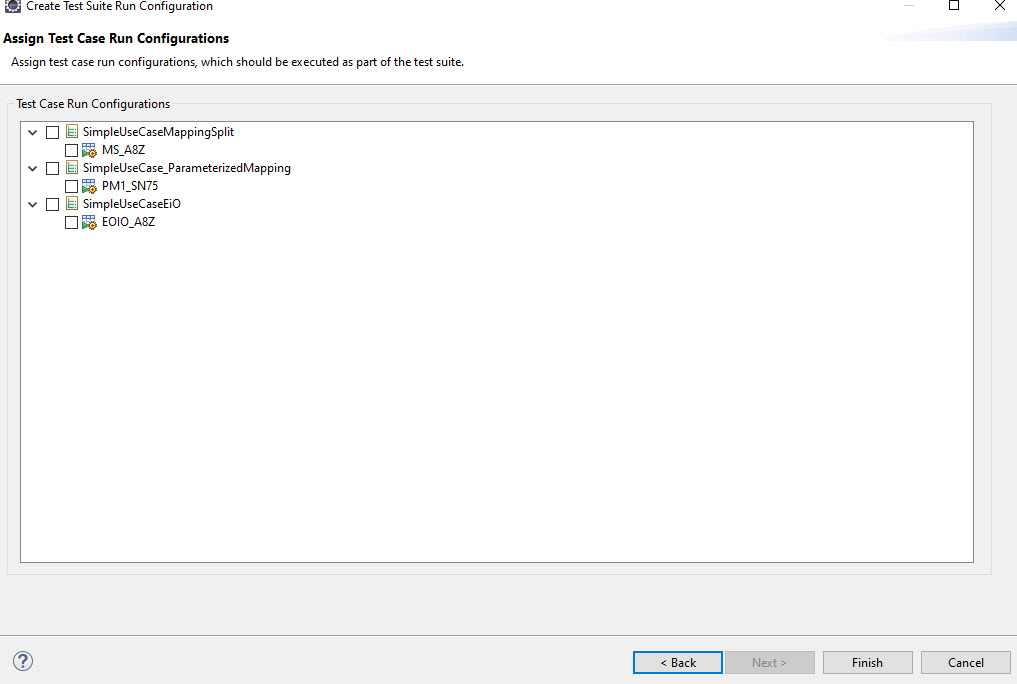 After saving, you can also schedule the test suite run configurations. 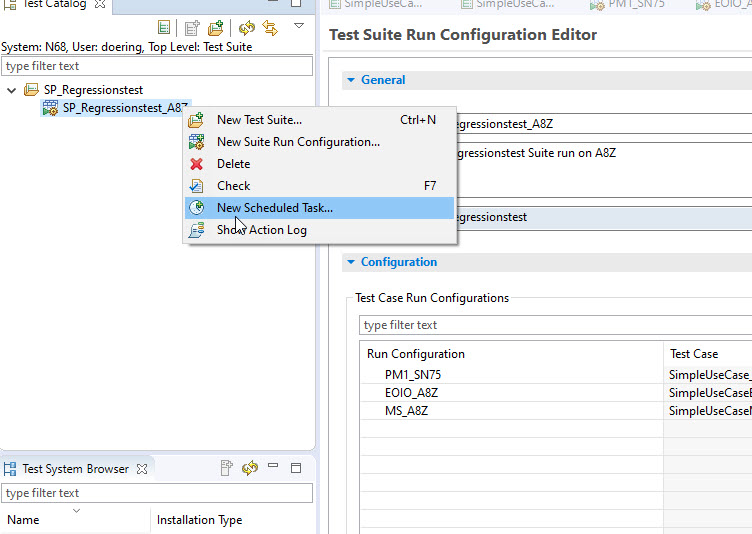 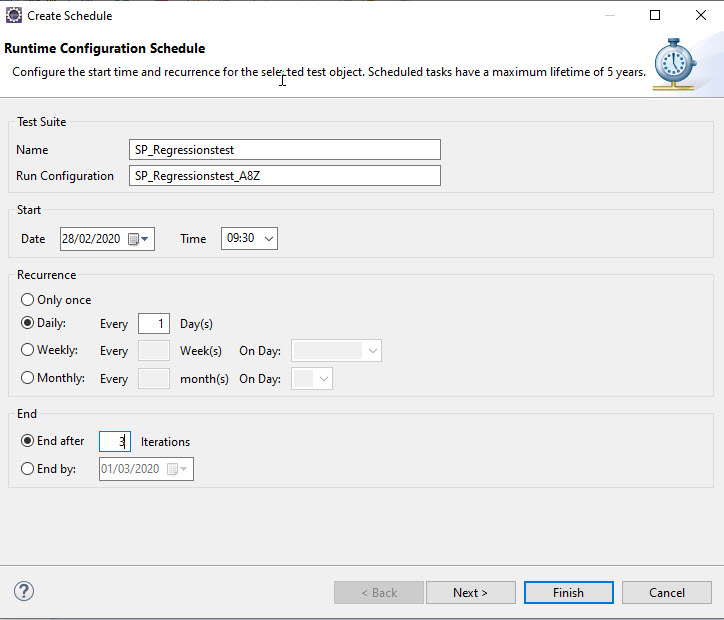 This also applies to the schedule task runtime behavior, see above. 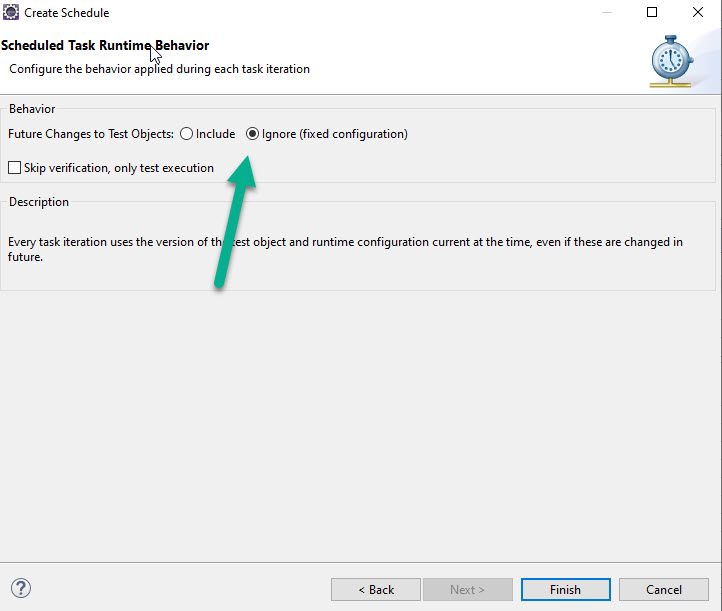 Scheduled run configurations will at the end schedule jobs. Those jobs are shown in the job browser

Starting with 7.50 SP17, we have provided a UI5-based client interface. It addresses the user group of testers who want to schedule and execute tests and check the results.

In the web-based client, a tester persona can carry out the following tasks:

The web-based UI follows a strict separation of concerns paradigm. The idea is that a tester persona does not develop tests but is only responsible for a regular execution of a “ready-to-run” test.

Previously, a test developer has modeled a test case in the NWDS client, extracted test data and ensured that a test runs successfully. As soon as the developer is ready, he/she creates a test case run configuration and hands over the regular test execution to a tester.

Tester can work in his/her UI only with executable entities of a test case or a test suite – with run configurations, and do not need to know anything about test systems, test cases and test suites. 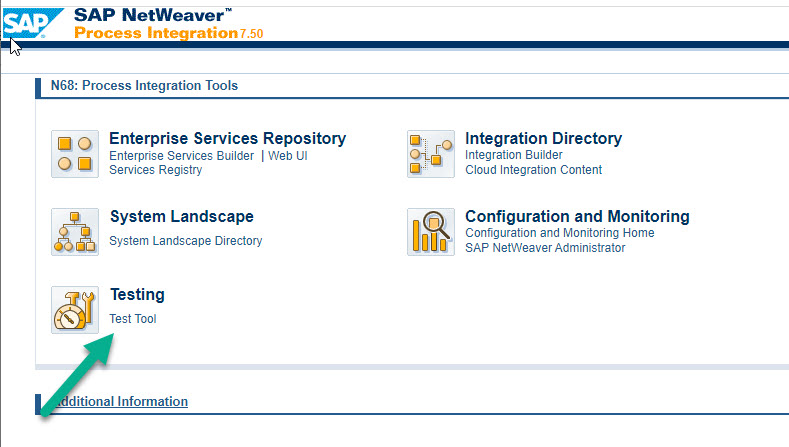 The Home screen provides a brief overview about current test executions and some statistics.

The Execution Statistics tile shows the number of currently scheduled tasks and the amount of jobs with issues in the last 24 hours.You can add further tiles with your own customized statistics view.The Test Catalog section shows how many run configurations exist in the PIT system.

The System Statistics section shows how many test systems are configured in the PIT system.

However, test system details can only be viewed in the NWDS client. 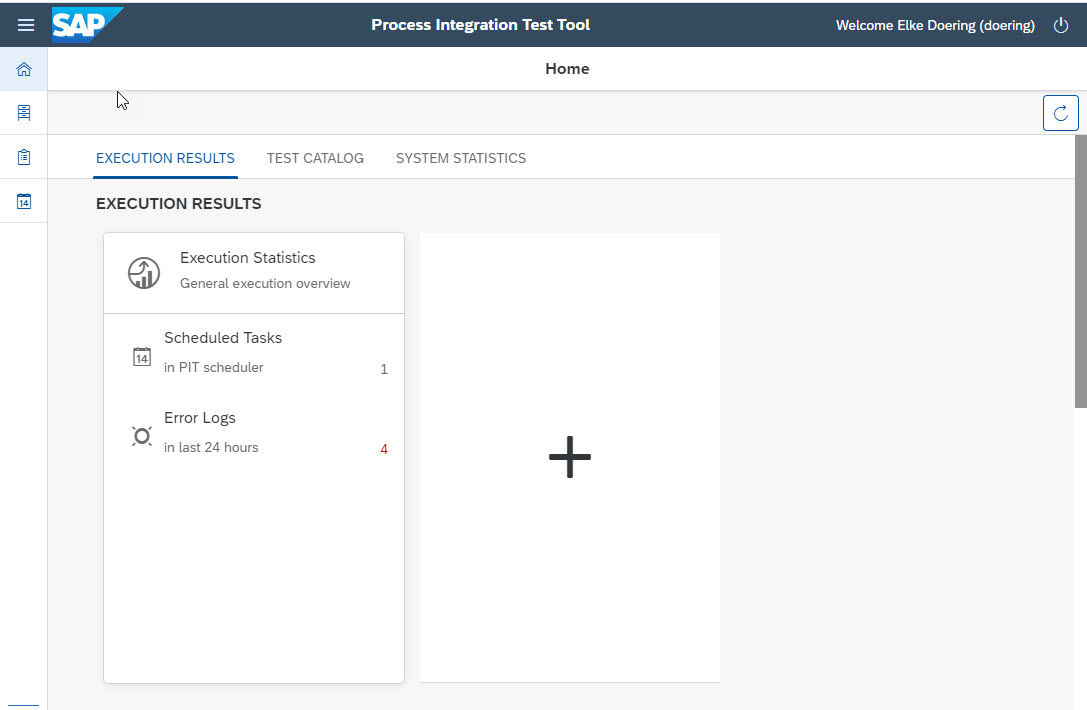 The Task Execution Result screen shows an overview of all executed jobs and tasks. The view corresponds to the Job Browser in the NWDS client. 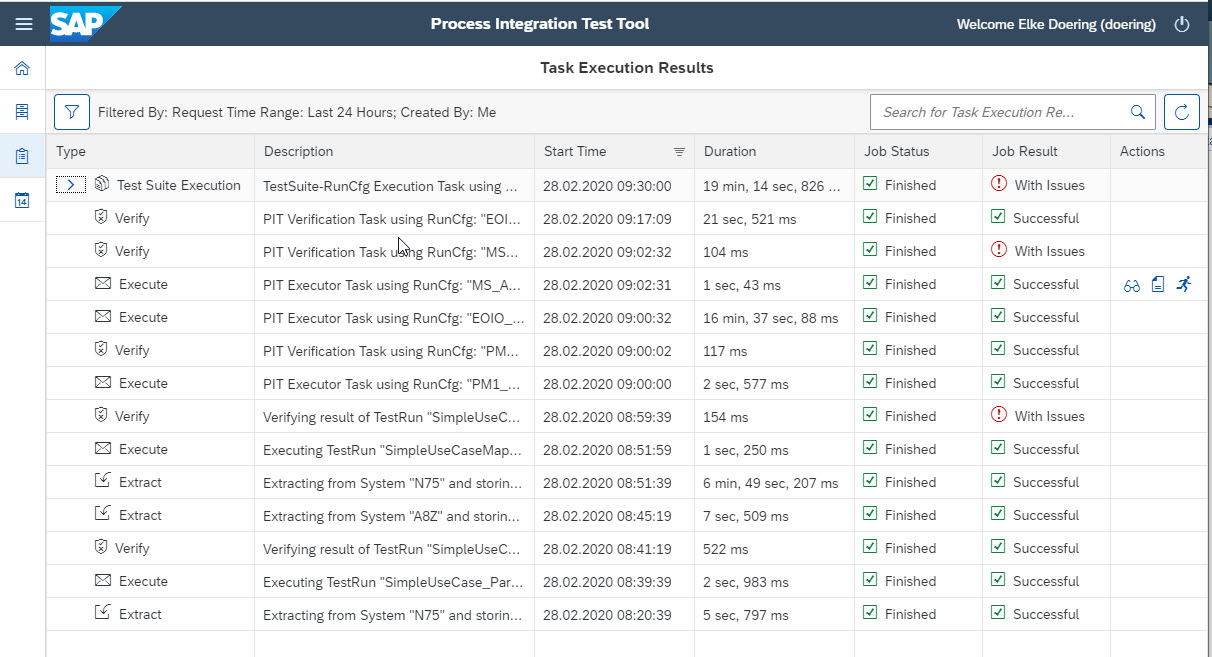 Move the mouse cursor over a table row in the Task Execution Result to show the advanced action buttons in the last table column: 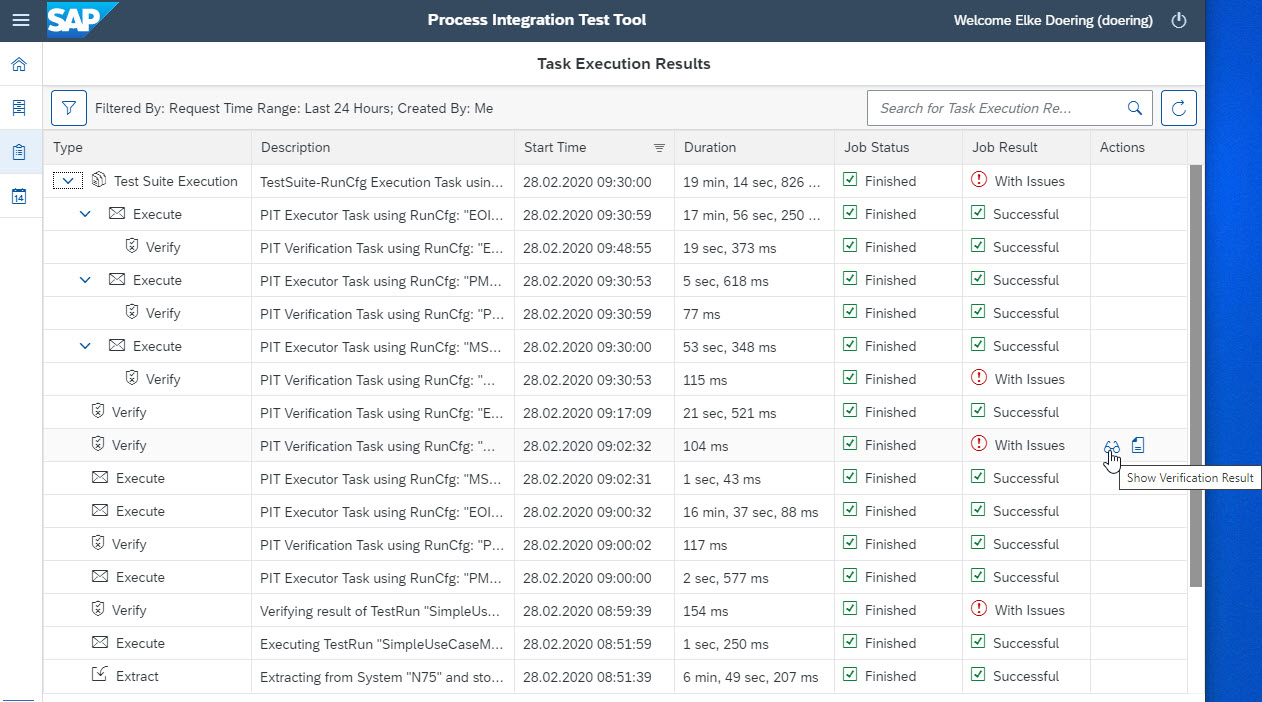 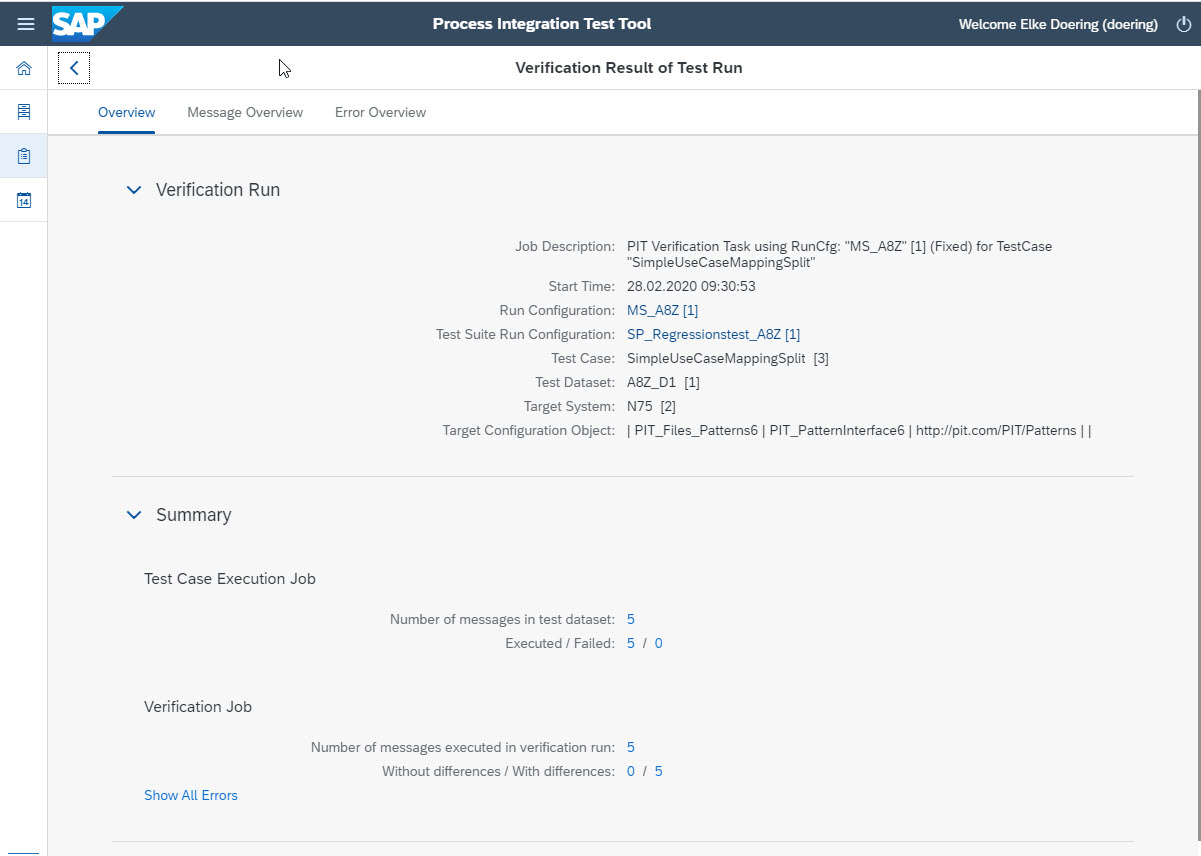 Switch to the Message Overview tab to get an overview of all messages of the test run and their verification status.

On the Error Overview tab, the error details are displayed.

On the Tests Scheduler screen, you can schedule tests for automatic execution and display existing schedules. 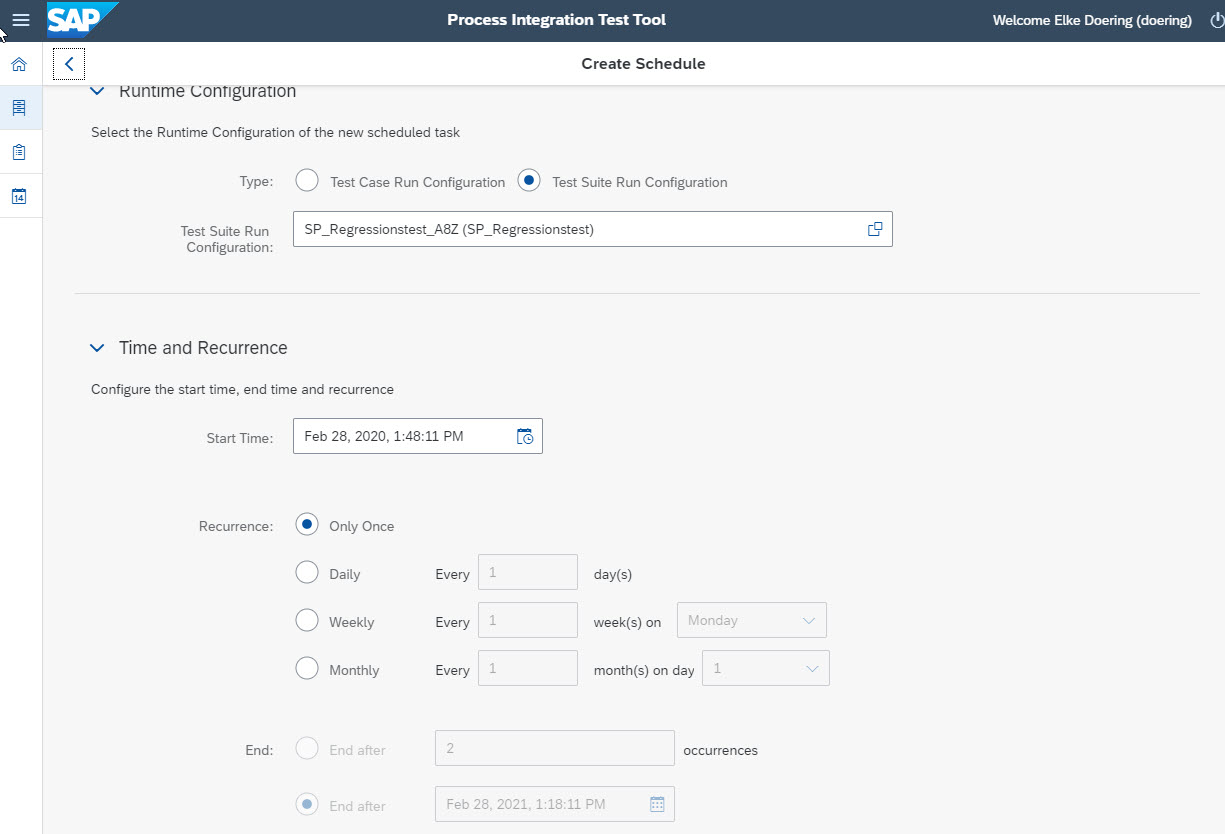 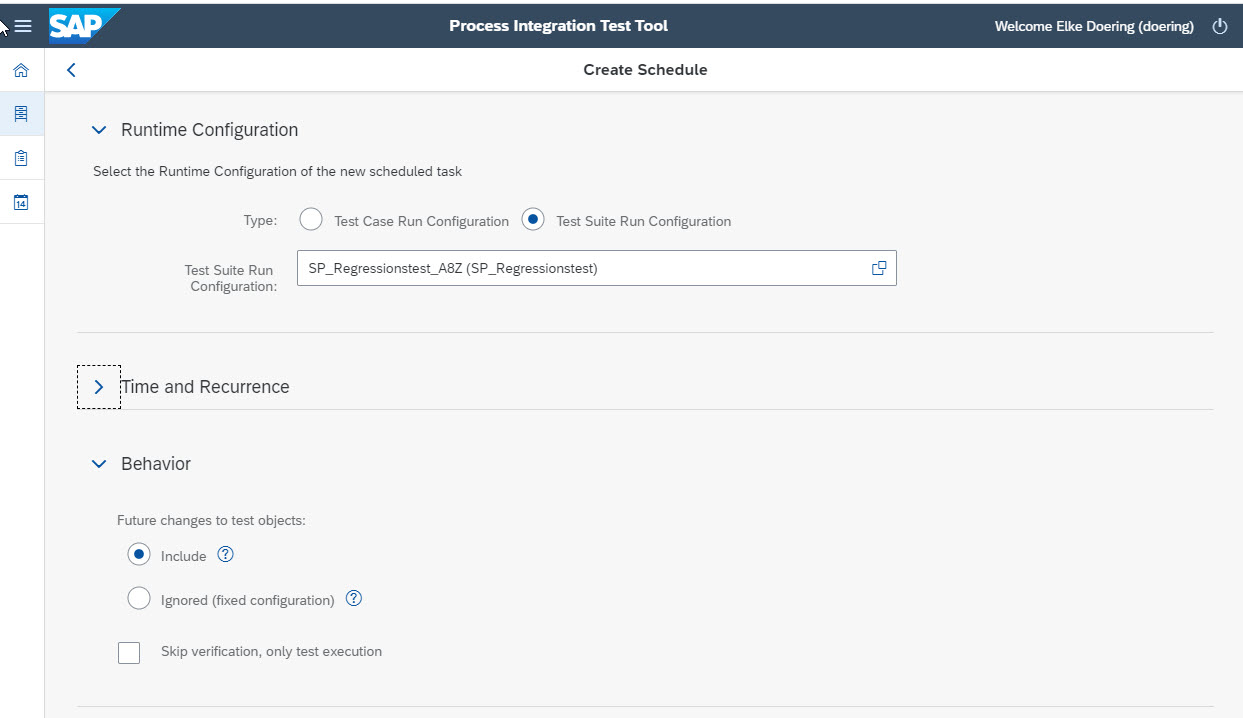 Optionally, you can create a new schedule from the test catalog screen. 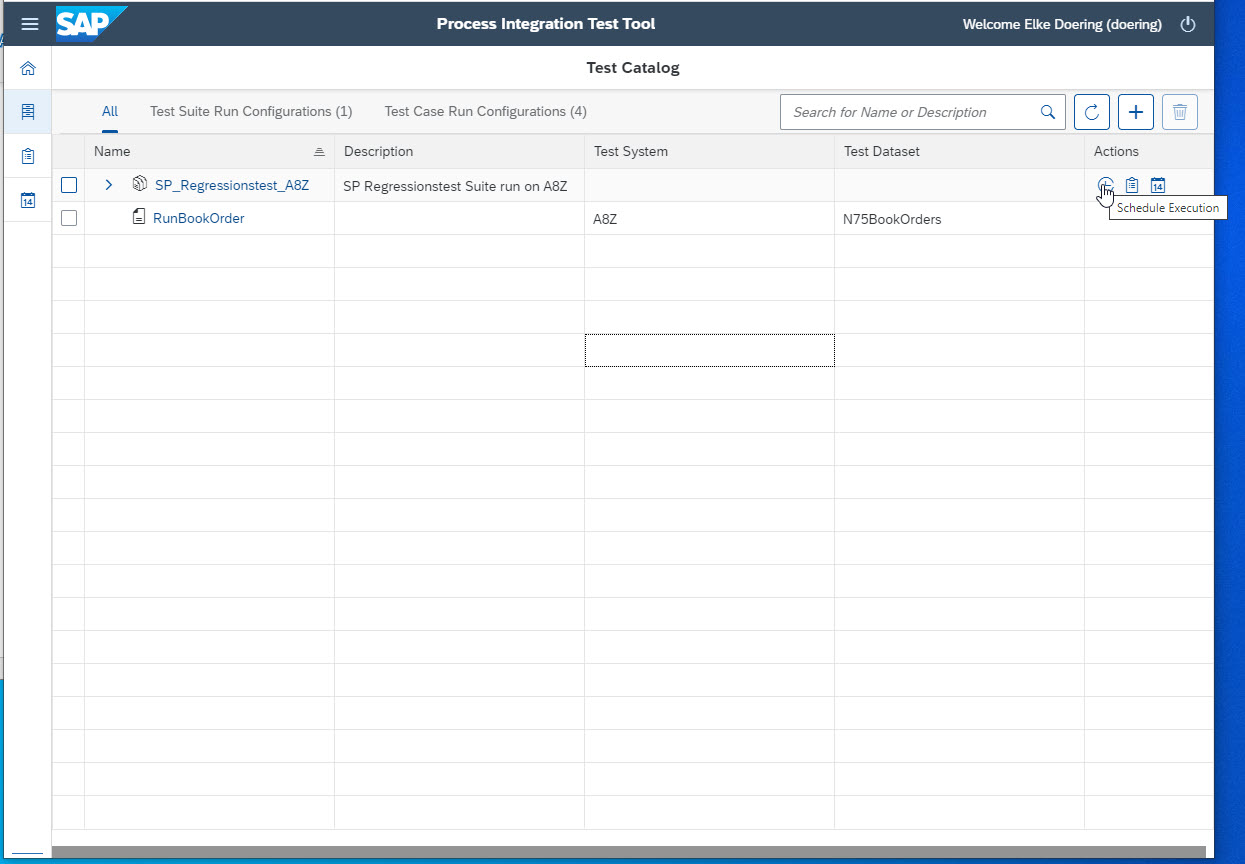 The Schedule Parameters are the same as in the NWDS.Same applies to the schedule task runtime behavior.

All run configurations and results are stored on the server and are shown in both UIs.

Finally, I would like to point to the PIT documentation. We have done major enhancements on the documentation, e.g. we have added some typical verification issues and its solution.

So please take a look at the SP17 documentation,

or the blogs we have provided earlier:

Providing the skills and talent you need to keep going